In Case You Missed It! 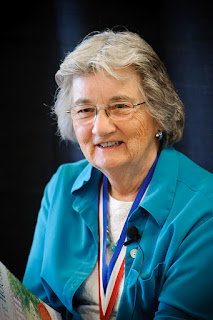 Fans of Katherine Paterson say good-bye and thank you next week as she hands over the reins of the National Ambassador for Young People's Literature position to newly named Ambassador Walter Dean Myers for the 2012-2013 term.

In the Huffington Post article titled "My Term As The National Ambassador For Young People's Literature," Paterson writes about some of her most moving moments as Ambassador:

"One of my best adventures was finding myself the prize of a national contest won by a tiny school in Sebago, Maine. A friend and I drove through a blizzard in the White Mountains of New Hampshire to get to Sebago, but it was worth it.

To introduce the day, the teacher picked up four books. "These were some of my best friends when I was growing up," she said. The first was a nearly worn out Little Golden Book. Her mother would take her and her brother grocery shopping and each week the children could take a turn selecting a book. They were to share the books. "But," she said holding up the book, "I must not have learned how to share, because, see, I've scratched out my brother's name and written my own."

Then she held up "Little House in the Big Woods," a book that taught her how people lived years ago and showed a shy child how good it was to be strong and independent. The third was a story book about Japan that made her long to go to Japan and to learn about the world outside her small home town. The last book was a book I had written: "Jacob Have I Loved." "This book," she said, "helped me understand how I felt because I was Louise. My mother saw how much I loved this book, and so she read it, and to my surprise, she thought she was Caroline. So I learned that two people can read the same book and learn very different things."

To learn more about Katherine Paterson and her books, click here.

To learn more about Walter Dean Myers and his books, click here.

For more information about the National Ambassador for Young People's Literature program, click here.
Posted by Geri at 7:01 AM