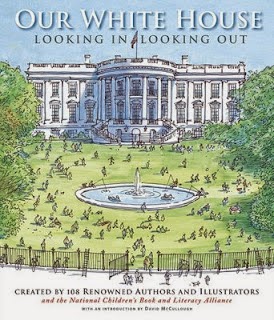 Also check out the exclusive articles and education resources available on the companion website OurWhiteHouse.org, such as:
"Primary Sources: Dolley Madison's Letter to Her Sister About the Burning of the White House"


Our White House is available
in both hardcover and paperback from Candlewick Press.
Ask for it at a library or bookstore near you!
Posted by Geri at 9:28 AM